Elimination Chamber Kickoff: Cody Rhodes and Goldust vs. Curtis Axel and Ryback
Ehhh... Do I give a fuck? No!


Big E (c) vs. Jack Swagger Singles match for the WWE Intercontinental Championship
Big E will win this one. He is on a push and Jack Swagger career seems to be on the downfall.


Batista vs. Alberto Del Rio
Batista for sure. Maybe a squash match, a one-sided victory for Batista.


The Wyatt Family (Bray Wyatt, Luke Harper, and Erick Rowan) vs. The Shield (Dean Ambrose, Seth Rollins, and Roman Reigns)
The Shield!?! I hope so!

This is a hard one!  No Cena, no Sheamus, no Cesaro, no Christian here, hopefully. This war is between Orton and Bryan. The two main players of the last couple of months.


The WWE pen pushers team sold us the idea of an undeserving paper champion (Randy Orton) and an eternal underdog (Daniel Bryan).

Randy Orton was cleanly defeated by Bryan, Cena, and Cesaro in the last two weeks. Lost by disqualification versus Sheamus. And on his five Elimination Chamber opponents, he was only able to defeat Christian... Orton goes 1-4 into this fight.

Our eternal underdog Daniel Bryan was intentionaly "injured" to his shoulder on Raw and Smackdown. And Corporate Kane will certainly do everything he can to preventing Bryan to become the champion.

Who's gonna face the undeserving Batista at WrestleMania XXX? That the real question here. Since the WWE pen pushers wants us to believes that Randy Orton and Daniel Bryan won't win this one. It is probably because that one of them is the obvious winner. Despite the fact that Daniel Bryan is the most popular wrestler in the world, the WWE legitimately doesn't seems to want him as his champion. So our "paper" champion Randy Orton will probably put on one hell of a performance and keep his championship title tonight. John Cena, hopefully not, is also a possible winner for this match.

Anyway, it will surely be a excellent match! 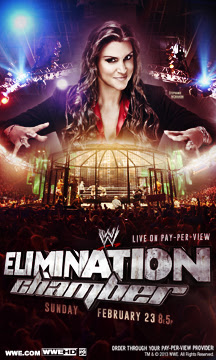