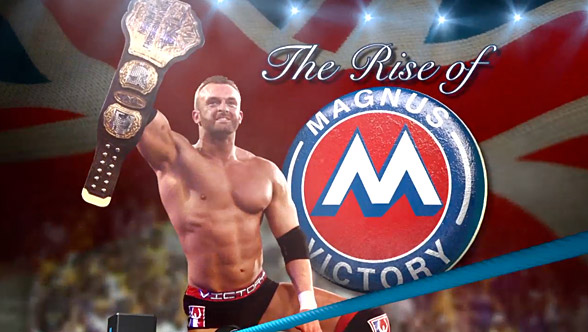 
Dixie Carter stated that it took her 11 long years to find the perfect heavyweight champion.  And now she find him in the person of Magnus.


Knockout Champion Gail Kim vs. Madison Rayne
Madison Rayne miraculously won with a pin after being trashed during the entire match.  By the way, it was a non-title match.


Samuel Shaw vs. a 140-pound jobber
Samual Shaw destroyed the ridiculously skinny jobber named  Norm Fermont or something like that.


EC3 bullshitting about Jeff Hardy in the ring...  Sting came out to defends his little girlfriend.. Blah, blah, blah...


Bully Ray threatened Joseph Parks that he will set his fat ass on fire.  LOL :-)  If only it could be true.


Bully Ray vs. Joseph Parks
Bully Ray did nothing except kicking Joseph Parks in the nuts.  Well done!  Parks won by disqualification but Bully Ray covered him with lighter fuel.  But just when he was on verge to lit the fat lawyer.  Mr. Anderson came to his rescue just to be spreaded with lighter gas also.  Bully Ray didn't set anybody on fire (unfortunately) and leaved the ring.

The Coronation of the new TNA World Heavyweight Champion

Gunner with his fuckin' briefcase...  Ouuu!!  Magnus don't have to be affraid since I don't see Gunner as a serious threat.  But anything is possible in the weird world of wrestling...  Gunner wants to cash-in.  But instead he was triple-teamed by Magnus, Scrub and EC3... Til the "real" World Heavyweight Champion A.J. Styles came to challenge the corporate champion Magnus.

The TNA World Heavyweight Championship situation is kind of confusing?

No! No! No! Yes! Yes! Yes! The damn Dixie Carter's TNA are now stealing from WWE's Daniel Bryan.  Nothing original can come from this second-rated wrestling league...

I just wish that Magnus's reign as corporate champion will be longer than Jeff Hardy reign during the Hogan / Bischoff TNA era.