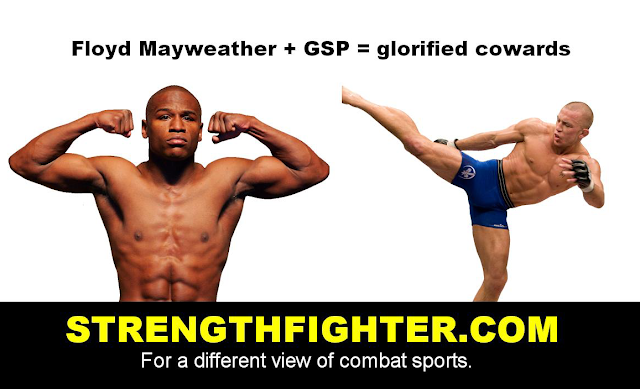 When it come to fashion, music and combat sports.  I'm an old school kind of guy.  I was raised on good ol' Saturday morning wrestling.  Sylvester Stallone and Arnold Schwarzenegger movies.  A little bit later, Mike Tyson's fights.  And the 8th wonder of the world, the early UFC era.  It was great!  As much great as todays UFCs are fuckin' lame!!

In the 90s, we had Mike Tyson and Evander Holyfield.

Now we have Floyd Mayweather and Manny Pacquiao.

In the 90s, we had Royce Gracie and Ken Shamrock.

Now we have GSP and Anderson Silva.

In the 90s, Mike Tyson and Evander Holyfield

Just take a look at both kingpins.  GSP and Floyd Mayweather. 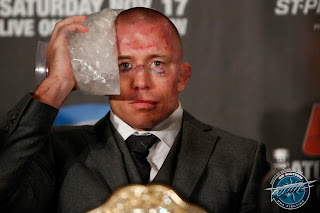 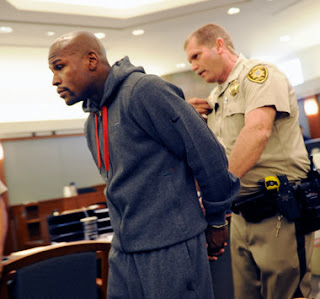 
Do I give a fuck about George St-Pierre?  Not at all!  GSP doesn't interest me more than Floyd "Money" Mayweather.  For me GSP and Mayweather are two fighters who can't finish off their opponents in the good ol' fashion way.  They both goes the distance rellying on the decision to save their asses.

+ Ducking the real best fighter in the world.
+ Fighting once a year.
+ Avoiding any contact with their opponents til the time limit.
+ Lay-and-Pray for GSP, light jabbing for Mayweather
+ Stole the unanimous decision win for doing nothing.
+ Get a multimillion dollar purse
+ Pass go.
+ Rinse and repeat.


That's our combat sports of today.  Two fuckin' boring fighters who see a combat as a game of chess instead of an all-out war.  So true that GSP's fight strategist is a chess master.  No joke! 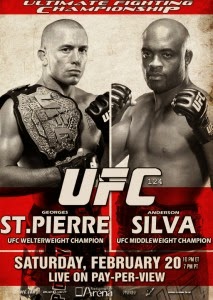 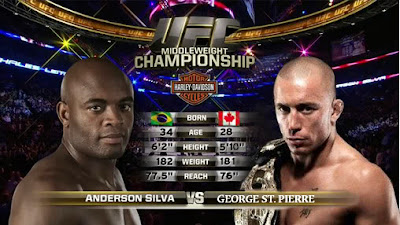 GSP refused a shitload of money to avoid fighting Anderson Silva.  Divesting the UFC/MMA fans from The Match Of The Century.  GSP cowardly claimed that Anderson Silva was naturally a heavier guy than him.  Saying that his natural weight is 180 lbs and that Silva's natural weight is 227 pounds.  (Don't use weight for an excuse, 175-pound Royce Gracie crushed three heavyweights a night on three different occasion).

And the crappiest, shittiest excuse he made was to said that if he fought against Anderson Silva he will have nothing less to accomplish???  What a fuckin' coward!!  One way or the other, as the rumors goes, GSP is only a few fight away from retirement.

In the meanwhile, Silva's aura was tainted by his loss and the match lost all interest.  Faithfully, just like it happened for Silva, GSP will be KO'ed by an inferior foe for less money.  And I will happily laugh at the coward.  Poor George, you better losing against the best in the world than the second or third best fighter!?! 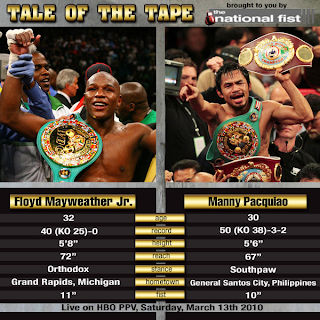 The match that Floyd Mayweather didn't want you to see. 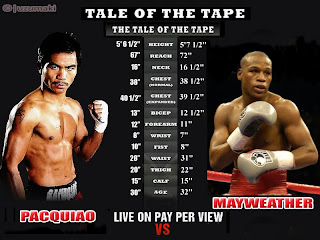 Just like GSP did with Anderson Silva, Floyd Mayweather cowardly make his way out of a fight against Manny Pacquiao.  But instead of ducking him with stupid claims and false statements just GSP did.  Mayweather was smarter than that.  He escaped a possible loss to Manny Pacquiao by adding silly contract stipulations.   Knowing that Pacquiao was a possible weed smoker.  Mayweather demanded that Pacquiao submit to Olympic-level random drug testing.

Then, just like the GSP vs Silva sagas.  Pacquiao, the ducked opponent, lost to inferior opponents trashing the public interest of the Dream Match.


Because of their lack of confidence in their own abilities.  Those two glorified cowards robbed the fans by divesting them of The Match Of The Century.  They respectively robbed Silva and Pacquiao, denying them of the opportunity of the lifetime.  They robbed the UFC and the boxing world from huge revenues and historical events.  Those two "best fighter in the world" screwed their own legacy by avoiding their most serious threats.

Why do I hate GSP

- GSP is a welterweight (weight classes are the worst sin in combat sports)
- His MMA record is 24 wins (8KO-5sub-11dec) - 2 losses (1KO-1sub)  Can't finish off his opponents.
- Unfrequent fights. He fought only 6 times since July 11, 2009.  ONLY 6 FIGHTS IN 4 AND AN HALF YEARS!!!
- His last 6 matches were unanimous decision wins.
- Fearing and ducking his only real challenge, Anderson Silva. Divesting the fans from the Match Of The Century.

Why do I love GSP

+ He is a fellow contryman from Quebec, Canada.
+ A classy, intelligent, and articulate individual.  An excellent ambassador for the sport.
+ GSP is a superhuman, beyond Olympic-level, world class athlete.


Why do I hate Floyd Mayweather

- Floyd Mayweather is a welterweight, light middleweight (weight classes are a capital sin in any fight sport)
- Mayweather's Boxing record is 45-0 (26)  Can't finish off an opponent.
- Got only 2 KO wins for his last 10 matches.
- Fought only 10 times since April 8, 2006.  10 fights in 7 years and an half.
- Ducked Manny Pacquiao. His only real challenge. Divesting the fans from the Match Of The Century.

Why do I love Floyd Mayweather

+ Showmanship and charisma.  He is a rich, colorful, polarizing, controversial, flashy bling bling hip hop style personality.
+ He loves money and flaunt it.
+ He have a flawless record: 45-0
+ He dabbled into professional wrestling.  Fought the Big Show at WrestleMania 24.
+ Excellent defense... Boring!

ONLY 7 DECISION WINS ON 33 VICTORIES
As you can see, Anderson Silva didn't goes for the easy way out ducking serious challengers and going the distance for a safe and boring decision win.  That's the reason why, Anderson Silva is still perceived No. 1 pound-for-pound mixed martial arts fighter in the world.  UFC president Dana White and other publications have called Silva the greatest mixed martial artist of all time.  Fuck you GSP!

Unlikely to happen against a feather-fisted like Floyd Mayweather.

Even "unbeatable" fighters like Silva and Pacquiao can go down. Unfortunately GSP and Mayweather think otherwise.

Because Silva and Pacquiao are real warrior.  Real fighters who goes for the kill.  Not boring chess players whose strategies is to do just as much as needed to win by decision without taking any risk.  And those two boring fighters are both adulated and worshipped  multimillionaires???

In what kind of fuckin' sick world do we live?