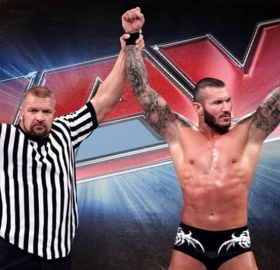 The best ever start you can get for a Monday Night Raw, the COO King of Kings Triple H in the ring, with The Shield assuring security, introducing "The Face of WWE" WWE champion Randy Orton.

But, the ugly little troll Daniel Bryan showed up...  Triple H compared Daniel Bryan to Doink the Clown.  Both very popular but both couldn't be WWE champion for obvious reasons.


The Miz vs. Fandango
The Miz submitted Fandango with the Figure-four leglock.  Fandango supposedly got his nose broken by a Miz's kick during the match.


CM Punk blah blah blah promo speech...  Finally something that I like about CM Punk.  He promess that he will broke the face of Paul Heyman at Night Of Champions.


Big Show vs. Daniel Bryan
With the entire roster forced to watch, gentle giant and big cry baby Big Show refused to fight the fiery Daniel Bryan in fear to hurt him???  Big Show broke down crying instead of punching Daniel Bryan???  WTF?  You're suppossed to kick ass for a living and now you refuse to fight a main eventer???  But finally, Triple H and Stephanie McMahon convinced Big Show to obey.  The Shield came in to destroy Daniel Bryan and the suicidally depressed Big Show finally punched the shit out of Bryan with the WMD.  Then, our WWE Champion Randy Orton came to the ring to wave his World Championship title belt over the dead carcass of Daniel Bryan.