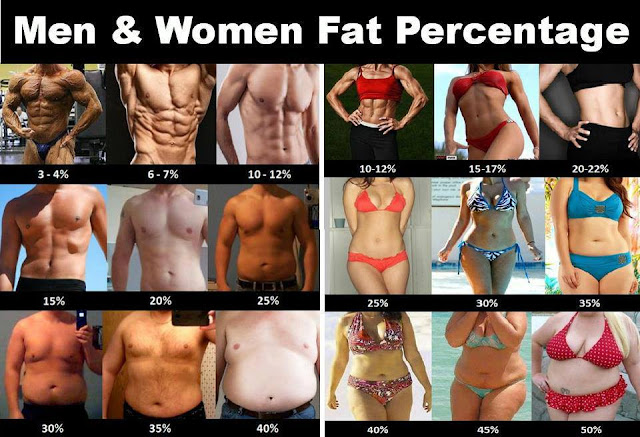 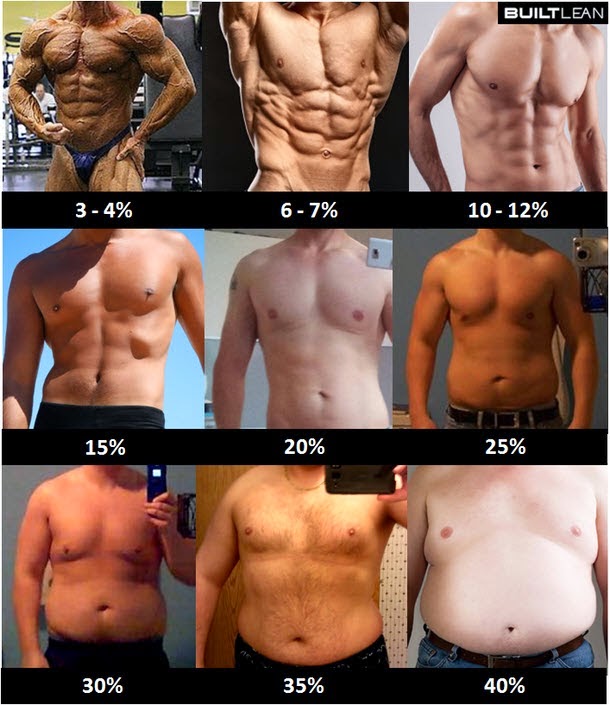 Bodybuilders can drop as low as 3-4% body fat when preparing for bodybuilding competitions. This body fat level is characterized by extreme vascularity, so that veins are visible over just about every muscle in the body. There is clear separation between muscles, and striations visible on almost every muscle. The buttocks (I’ll spare you a back picture) even has striations, some vascularity, with little fat. If your buttocks doesn’t have any body fat, you’ve got VERY low body fat! Essential fat for a man is around 2%, which is the basic amount of fat a man needs for the body to function (fat protects internal organs in the chest and abdomen).

Approximately 6-7% body fat for a man is a bit less extreme than competition bodybuilders, but it’s still hovering at a level that is not sustainable for most men. Around this level, or slightly less, the face becomes gaunt, and your family starts worrying about you. This 6-7% body fat level, which is achieved by many male fitness models when doing photoshoots, is characterized by muscle definition in all muscles and clear vascularity in most muscles including arms, legs, and even abs. Vascularity over the abs muscle is a sign of very low body fat. Clear separation of muscles as well.

This is a sustainable level for most men where you should be able to see your abs, but they will likely not be as defined as a man in the 6-7% body fat range. This body fat range is the classic beach body look that most men want and many women love. While not very defined, there is separation between muscles, some muscle striations potentially in the shoulders, or arms, but striations are not showing on every muscle. Vascularity is typically limited to the arms, with a little possibly on the legs.

The 15% body fat level is usually within the “lean and fit” category in most body fat percentage charts. The outlines of muscle can be seen, but there is no clear separation between them. Vascularity is usually a bit more limited as are muscle striations, which are typically covered by a thin layer of fat. The overall shape is still there, which can create an aesthetic appearance despite less muscle definition.

Separation between muscles starts to blur, almost no vascularity, or striations can be seen, typically there is a small stomach pouch of fat, the look is “soft” but not very round. Most guys I come across in NYC are within the 20-25% body fat range. Other parts of the country, or world, that range may be skewed higher or lower. A 5’11”man who weighs 180lb and has 145lb of lean body mass (the average) will have 20% body fat.

There is little to no separation of muscles, no vascularity, or muscle striations, waist begins to increase quite substantially with a waist to hip ratio as high as 0.9 (waist circumference/hip circumference). So a 5’10” man may have a 36+ inch waist. This man may have a little neck fat, but may not look like he has 25% body fat in normal clothing. Over 25% body fat for a man is considered obese, and over a 40 inch waist is considered abdominal obesity.

There is more fat all around the body at the 30% level including waist, back, thighs, and calves. The waist looks larger relative to the hips, and the stomach will likely be protruding over the waist noticeably. There is no muscle separation.

As men get heavier and heavier gaining more fat, most of the fat is funneled right in the stomach. The 35% level is characterized by more significant protrusion of stomach fat over the waist. This is the beer gut kind of look. Waist circumferences can be 40+ inches for a man with 35% body fat.

Similar to the 35% level, even more fat accumulates in the stomach and waist region, so that waist sizes can approach 45 inches, or more. At this level, basic every day activities like walking up stairs, or bending over to pick something up becomes increasingly difficult. This body fat level is approaching morbidly obese, which is characterized by a BMI over 35. To put it in better perspective, a 5’11” man who weighs 270lb and has 160lb of lean body mass has 40% body fat. 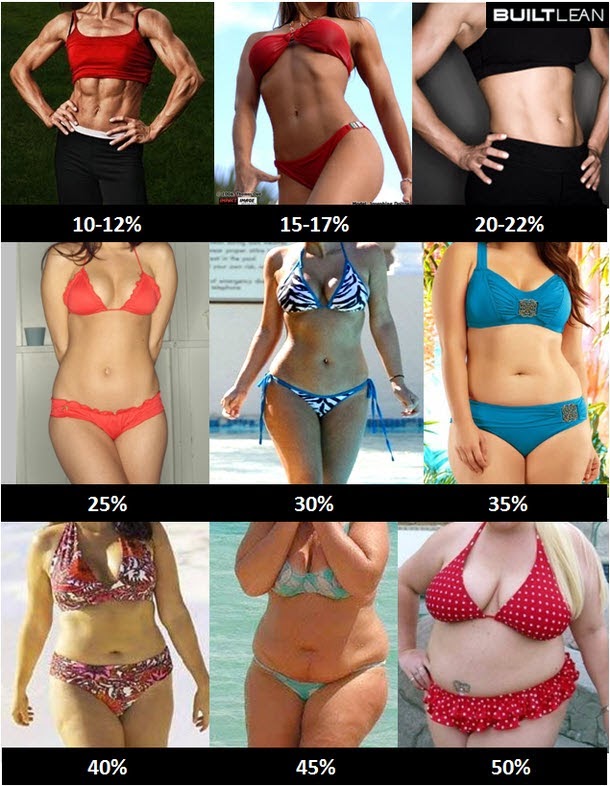 This is an extremely low body fat level typically attained by female bodybuilders. Essential fat for women is round 8-10% compared to 2% for men. Why the difference? Women have more fat in breast tissue and the area surrounding the uterus. This level of body fat is not considered safe, or healthy for women who will be unable to menstruate. Striations of muscle, separation between muscles, clear vascularity are all noticeable at this level. The women in the photo is likely at the higher end of the range at 12% body fat because she is not too vascular.

This is still considered a very low body fat for women, which is similar to the 6-7% body fat for range men. Many bikini and fitness models will reach this body fat level and some may not be able to menstruate. Muscle definition in the abs, legs, arms, and shoulders is apparent, there is some vascularity and some separation between muscles. Hips, buttocks, and thighs generally have a little less shape because of the low body fat.

This is body fat percentage is usually in the “fit” category of most body fat charts and is typical of many female athletes. Some definition in the abs is apparent, there is body fat on the arms and legs, but it’s not too pronounced. There is minimal, but some separation between muscles.

This is on the low end of what’s average for most women and is characterized by a shape that is neither too slim, nor overweight. Curves in the hips are usually more apparent along with more fat in the buttocks and thighs. A 5’4” women who weighs 130lb and has 97lb of lean body mass has 25% body fat.

While most men have fat funnel into their stomachs, as the body fat of most women (but certainly not all) increases, this fat tends to accumulate in the hips, buttocks, and thighs. At 30% body fat, the hips, thighs, and buttocks are more pronounced and round. This is considered the high end of average for women in many body fat charts.

The hips become even wider at this level of body fat and the face and neck will appear rounder and more full. Hip circumference can start approaching 40+ inches and waist circumference of 32+ inches. Some belly fat may start protruding over the waist as well.

The hips and thighs grow larger so that hip circumference can reach 42+ inches, waist of 35 inches, and thighs over 25 inches.

The skin may begin to lose its smooth appearance as more and more fat accumulates. Hip Circumference can may reach 45 inches+ and waist circumference 35+ inches. The hips may become noticeably wider than the shoulders.

The will likely look like it has dimples more fat accumulates. Hip Circumference can may reach 45+ inches and waist circumference 40+ inches and thighs above 30+ inches. The hips will likely be noticeably wider than the shoulders. To put it in better perspective, a 5’4” women who weighs 200lb and has 100lb of lean body mass has 50% body fat. 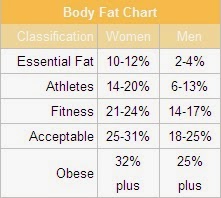 Moral of the story. We are all fatter than we think we are.

How to Measure Your Body Fat Percentage

An easy but inaccurate way to measure or at least have an idea of your body fat level is the Anthropometric / U.S. Navy method / YMCA formula.
This method takes waist, neck, and height circumference for men and hips, neck, and height for women. A U.S. Navy Method calculator is available on this website

Otherwise for a more accurate measure of your body fat. Ask a gym trainer to do it with a skin fold caliper.

However the water displacement test is the most accurate way to determine body fat percent. This method is expensive and requires special equipments.