I remember as a child being really thrilled to see Ricky Martel ring entrance where he to run to the ring bearing the Canadian flag. His match against Mr. Saito is among my earliest wrestling's souvenirs. His promo video (the last video of this post) and I also remember Stan Hansen ramming Martel's back onto the metal ring post. Good memories! I was already familiar with Martel since he was a fixture in Lutte International (Quebec, Canada) often wrestling in my location. 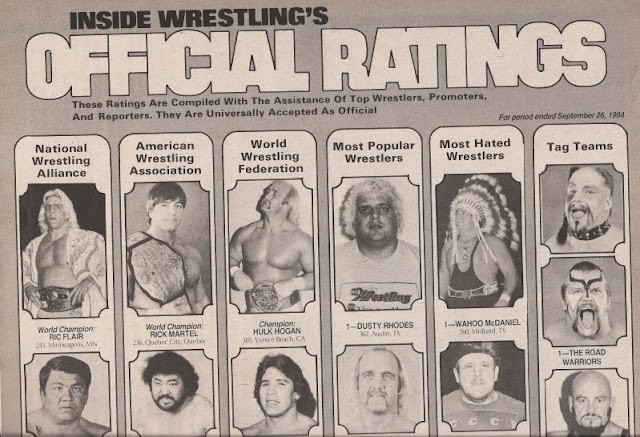 As described on canoe SLAM! sports wrestling: "When wrestling hit its peak in the mid-'80s, with the Rock 'n' Wrestling connection, Hulk Hogan's 24-inch pythons and Ric Flair's stylin' and profiling, Rick Martel was on top of the world."  Indeed, being the AWA World Champion, the French Canadian babyface Ricky Martel (6', 236 lbs) was elevated to the level of WWF World Champion Hulk Hogan (6'8", 302 lbs) and NWA World Champion Ric Flair (6'1", 243 lbs).

For the style of booking of AWA honcho Verne Gagne, Rick Martel was the perfect choice for a World Champion.  Verne Gagne's favorite champion was the creepy old, around 50 years old Nick Bockwinkel  refused to make the ultra-charismatic Hulk Hogan his World Champion.  And once cherish the project of making the 5 ft 9, 420-pound of pure fat Jerry Blackwell is number one babyface.  So with this kind of horrific, short-sighted booking oblivion, Rick Martel was a fantastic choice AWA champion.

Now let see the post-AWA championship reign of modern-era AWA World Champions.  Let see if those worthy AWA champions were as successful elsewhere.  Look at the fact, former AWA World Champions Jerry Lawler, Rick Martel were nothing more than mid-carder in the WWF/WWE.  Larry Zbyszko was a mid-carder in WCW.  Curt Henning was a great WWF Intercontinental champion but still wasn't a main eventer.  Verne Gagne and Nick Bockwinkel were both past their prime as AWA champions.  Mr. Saito never was a "world champion" anywhere except in AWA.  Nonetheless, Otto Wanz and Jumbo Tsuruta were both "world" champions in Europe and Japan respectively.  And Stan Hansen was highly successful in Japan.

What a crappy set-up for the Stan Hansen 's Boston crab!!


Rick Martel Music Video (shitty music warning)
I remember seeing this video as a child while watching the AWA.