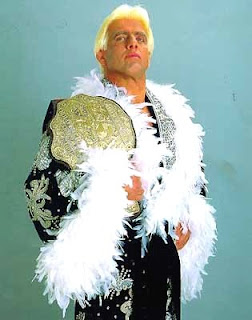 Flair is considered to be one of the greatest professional wrestlers of all time with a professional career that spans 40 years. He is noted for his lengthy and highly decorated tenures with the National Wrestling Alliance (NWA), World Championship Wrestling (WCW), and the World Wrestling Federation/Entertainment (now known as WWE), in addition to a brief stint in Total Nonstop Action Wrestling (TNA). Flair is officially recognized by WWE, TNA, and PWI as a 16-time World Heavyweight Champion (eight-time NWA Champion, six-time WCW Champion, and two-time WWF Champion) although actual number of his World Championship reigns varies by source—Flair considers himself as a 21-time World Champion in NWA, WCW, and WWF (now known as WWE), also Ric has won three-time NWA Champion in All Star Pro Wrestling, All Japan Pro Wrestling (AJPW), and Central States Wrestling (CSW). Total, Ric Flair 24-time World Heavyweight Champion.  Flair has five title reigns that lasted over 400 days. Here are his longest: 476, 793, 412, 452, 426 days.  Ric Flair held the NWA world title for 2859 out of 3215 days from September 17, 1981 – July 7, 1990. That means there was only a combined 356 days during that stretch he did not have the title. That’s dominance.

Ric Flair, the heel you love to hate. A coward, a wimp who was crying and begging for mercy. Whether he faced a champion or a jobber, Ric Flair was always on the receiving hand of a beating for most of the match. But at the end, Flair always find ways to win. Intentional DQ, intentional count out, foreign objects, outside interventions... Ric Flair always get away with his title.

No to forget, Ric Flair was a fantastic worker, able to make a good match with anybody.  He certainly wrestled more five stars matches than any other wrestlers.  Plus endless charisma, mic skills, and a rich man gimmick...  Ric Flair was the man. 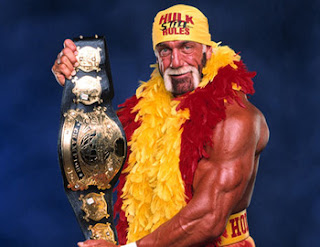 He is a 12-time world champion being a six-time WWF/WWE Champion, six-time WCW World Heavyweight Champion, and a former WWE World Tag Team Champion with Edge. He is the second longest combined reigning WWF Champion of all time (after Bruno Sammartino), the longest-reigning champion of the 1980s, and holds two of the ten longest title runs in WWE/WWF history, having held the title for 4 years (1,474 days) from 1984-1988 (the fourth longest reign of all time) and 1 year (364 days) from 1989 to 1990 (the 9th longest reign of all time). He is also the longest-reigning WCW World Heavyweight Champion of all time, with a 469 day reign from 1994-1995. Hogan won the Royal Rumble in 1990 and 1991, making him the first man to win two consecutive Royal Rumbles.

The most popular and charismatic wrestler ever. Just like Rocky Balboa, the Huckster could shake off of any beating, "Hulk-Up" and rally to destroy his heel opponents. Hulk Hogan was the ultimate American hero and a powerhouse. 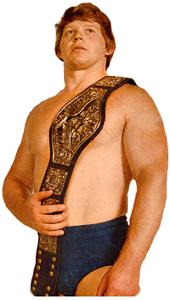 He was a two-time WWWF/WWF Champion. Backlund holds the record for the second longest reign as WWE Champion in history - almost 6 years (2,135 days), ahead of Hulk Hogan's first reign and behind Bruno Sammartino's.

Bob Backlund was the classic good guy, shaking his opponents hands before and after the match, waving the crowd, always calm and polite, and respecting the rules. But he was a shooter and a skilled amateur wrestler blessed with unusual strength despite his look. Bob Backlund could legitimately kick your ass and squeeze you like a pretzel.

TOP MOVES OF BOB BACKLUND - 10:23 Skip the jerk at the beginning, the compilation starts at 2:37. Except for the jerk, this is an excellent well-made compilation.

A very accurate top 3 by the always excellent PWI.  I know for sure that Hulk Hogan and Ric Flair are by far, the greatest pro wrestling icons of all time.  Both in a class of their own.
Publié par PYGOD à 10:11