I never meant to include Chris Brown’s name in one of my tweets for publicity. Now that he’s accusing me of using steroids please allow me to retort.


I’m a life-long, proud, drug-free straight-edge individual. So Chris and I come from two completely different worlds. I don’t have a manager, bodyguard, assistant, or a PR team to tell me when to Tweet or to delete Tweets. And I don’t hit women. Period.

In my world women are meant to be revered and respected, and I firmly believe that in this life there are consequences and repercussions for people’s actions and I think Chris Brown hasn’t paid for what he’s done. Picking up trash on the side of a highway does not make amends for repeatedly striking a woman to her face and sending her to a hospital.

So, Chris wants to throw stones my way now and I say that’s fine, but I say put some gloves on in the ring and I will choke you out and make you feel as weak and as powerless and scared and alone as any woman has had the misfortune of knowing any sad cowardly little boy as yourself. And all proceeds can go to a woman’s charity of my choosing. If you want to pick up more trash on the side of the highway to make some amends, you should donate some more time, maybe tell kids exactly what you did isn’t right. But I’m also a realist, and I know none of these things will happen because Chris Brown isn’t a man.”

"I never intended to include Chris Brown's name in one of my tweets to start some sort of a controversy or gain publicity," Punk said. "Now that he's thrown accusions my way about using steroids, I feel the need to reply. ... I don't hit women, period -- In my world, women are to be revered and respected and I firmly believe that in this life, there are consequences and repercussions for people's actions and I don't think Chris has paid for what he's done. ... So Chris wants to throw stones my way now, and I say that's fine, but put some gloves on and get in the ring. I will choke you out and I will make you feel as weak and as powerless and scared and alone as any woman who has had the misfortune of knowing a sad, cowardly little boy such as  yourself." (TwitVid)

"I look old as shit! I'm only 23...," Brown wrote. Johnson, who has more than 308,000 followers, replied: "I know! Being a worthless piece of (expletive) can really age a person." Her comment was retweeted more than 3,400 times. That set off Brown, who's gained a reputation as a hothead after beating his then-girlfriend Rihanna in 2009 and pleading guilty in a felony assault case. The pair has apparently patched up their relationship, and reportedly spent Thanksgiving together, although Brown continues to be plagued by the domestic violence rap. His latest Twitter feud with Johnson may only add more fuel to the fire. In response, Brown tweeted that she was engaging in oral sex with him, and later wrote, "Thanks HO!" when she corrected him about a misspelling. (New York Daily News)

This piece of shit is so proud of himself that he even got a tattoo of a battered Rihanna on a highly visible era for the whole world to remember.

I would love to see C.M. Punk squash these piece of shit woman beater Chris Brown 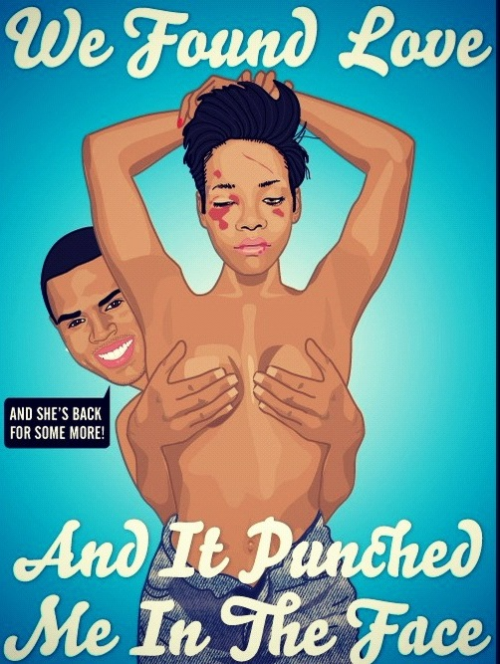 What to say about Rihanna?
A multimillionaire super sexy & successful pop star who can have any man she wants but deliberately choose to be the victim of a no-good womanbeater like Chris Brown???
"Unapologetic" my ass!
Stupid ho!!
Publié par PYGOD à 14:54