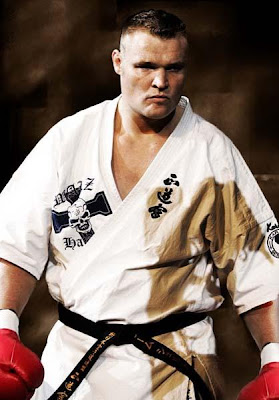 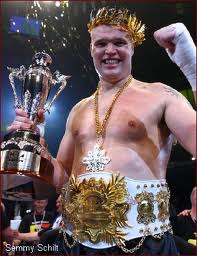 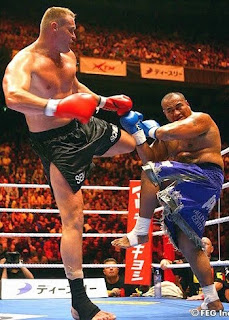 Who said that giant fighters are always plodding and clumsy?  Here is a proof of the contrary, 6'11.5" (212 cm), 291 lbs (132 kg) with a wingspan of 88" (224 cm) "Hightower" Semmy Schilt is a four time (three times consecutive) K-1 Kickboxing World GP champion. He is the only fighter in K-1 history to win the championship three times in a row, and also shares the record with Ernesto Hoost for most GPs won, with four.  And he is also an accomplished MMA & Ashihara Karate fighter.

Semmy Schilt is so superior and dominant that in 2009 he won his fourth WGP title getting the record of fastest GP win with a total time over all 3 matches of 352 seconds.  Think about it, he streamrolled 3 world-class kickboxers in only 352 seconds!  For an average of 1:57 per fight!!

Many experts believes he is "the greatest K-1 fighter of all time".  Let's see some facts to proove their claim. 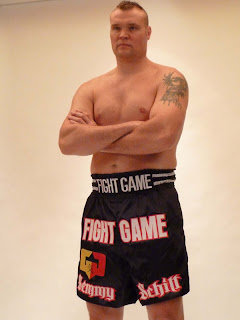 
No fighter has dominated an era in K-1 history like four-time champion Semmy Schilt. The High Tower from Holland is, quite simply, the most powerful K-1 champion in history and a man who dominated the last ten years by breaking K-1's most time-honored records.  Long live Semmy Schilt!  Long live the King!

However, K-1 veteran Peter Aerts is probably his closest rival for the title of the greatest K-1 fighter of all-time.  If Schilt dominated the 2000s era with his four Grand Prix titles, Peter Aerts dominated the 90s era by winning three Grand Prix tournaments.  And as seen above in the section 'record vs. K-1 greats', Semmy Schilt got the upperhand in his feud against K-1 greatest fighters except for one, Peter Aerts.  The veteran Peter Aert bested Schilt three times by judges decision (2006, 2008, 2010) in Schilt's era.  Schilt defeated him twice, once by TKO (leg injury) and the other by decision. So how's the best? Watch the video below and make your choice.