Dennis Sester - World's Biggest Arms
As you have seen in one of my preceding article: "The Biggest Arms In The World".  Dennis Sester of Bloomington, Minnesota is by far the Guiness book World Record owner of the biggest arms in the world.  His right biceps measure an unbelievable 305/8 inches (77.8 cm) when cold.  And his left biceps is slightly smaller, measuring 281/4 inches cold.  But both his arms are big enough to be the world's largest biceps.  Imagine how much Denis Sester enormous biceps measure when they are pumped!?! 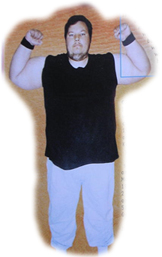 His secret to develop his just under 31" biceps?  Ehhhh...  Doing curls with a 150-lb bucket of sand and wrestling with 400-pound pigs in the mud as a teenager.

"Big" Tom Sester, his father, was 6 feet 9 inches and 550 pounds and as Denis would say, was super strong.  "He could reach down and grab a 500-pound pound hog by the ear and tail and throw it up in the truck without even thinking about it."